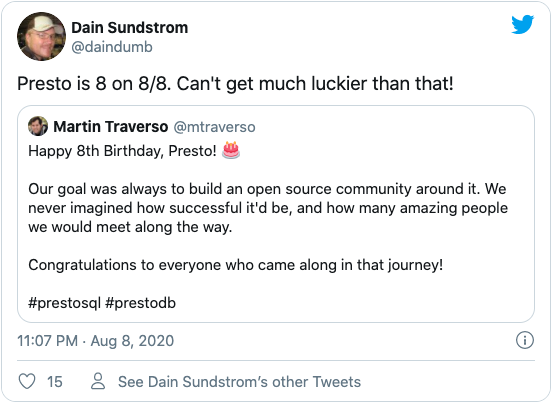 Even though Presto is a relatively young project, countless consumers, developers, and business personnel have felt its impact. It’s pretty clear that there’s a lot going on with this project since its inception eight years ago. Recently, the Presto project hit a stunning twenty thousand commits: 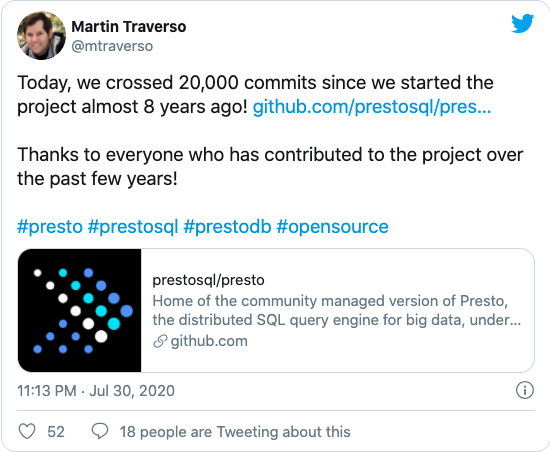 It makes you ponder how Presto became so successful in such a short amount of time. Should the credit be given to the four founders who brought Presto to life? Perhaps the supporting companies that provided the conditions that called for such innovation? Or was it the community built around Presto since its inception that has enabled this radical success?

In my mind, it’s a combination of these conditions but with a special emphasis on the latter. Without the founders’ dedication to designing Presto for speed and extensibility and putting emphasis on a welcoming and inclusive open-source community we wouldn’t have seen Presto outside the walls of Facebook. Without companies like Facebook, Teradata, Netflix, and Treasure Data that acted as a catalyst to this change, we wouldn’t have the initial use cases that tested Presto’s scalable design and shined a light on Presto to bring the awareness to the masses. Finally, without the passionate community of developers who took an interest in giving back their time and efforts, Presto wouldn’t be anywhere near as robust or flexible as it is today. Now Presto has reached an unprecedented level of maturity and helped many developers, scientists, and analysts find the answers they were looking for. It speaks volumes about just how special the project really is.

This community of developers is really special in that the level of expectations for developers new to OSS (open source software) is really a low bar. Speaking from personal experience as a serial OSS attempter, when I joined I noticed everyone treating each other with respect, a willingness to teach, and a deliberate openness to new ideas. I interfaced with engineers working at Starburst, the founders of Presto, and many passionate developers like myself who also knew a thing or two about the project that were so helpful to me. This was unlike other experiences I had in the past that made joining an open source community an elite club that only existing members had access to. To me, this inclusiveness is why the presto community is thriving.

The Presto community is most vibrant in the slack channel. Here users and developers may ask questions such as installing and using presto, discussing bug fixes or design changes, or sometimes just sharing great experiences or news related to presto. This slack channel has recently grown to 2300 users with around 500 active users at any given time. 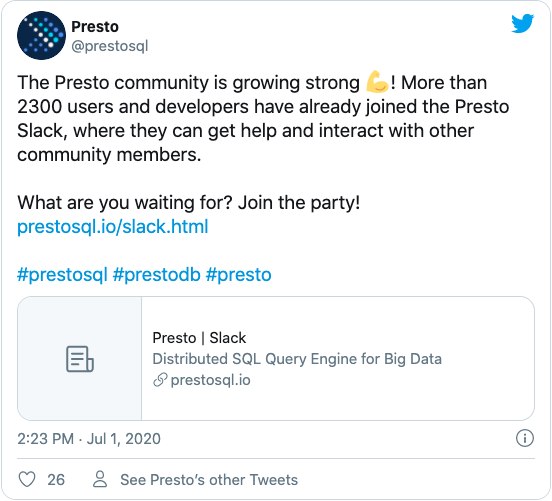 To celebrate Presto really means to celebrate this community, and while we can’t thank every individual who has contributed, we want to thank just a handful of you for your hard work. Thanks to these engineers for their contributions to the Presto project!

While linking you to a blog post may not be a satisfactory thank you, the gratitude is perhaps best stated on the presto-users google group by co-creator Martin Traverso:

When Dain, David, Eric and I started the project that many years ago, we had the goal to make it open source and build a community around it. What we never imagined was how far it would go, how widely it would be adopted across the entire world, and how many amazing people we would meet and get a chance to work with along the way.

Congratulations to everyone who played a part in that journey. It’s been a great ride so far. Here’s to another 8 years!”

Thanks to everyone who has contributed to Presto, congratulations to the founders for starting such an amazing project. Together let’s make Presto the most useful analytics tool yet!