In the last few days we had a surge of folks in our community reaching out with concerns over the Log4Shell exploit (CVE-2021-44228), and we want to inform you that Trino is not affected. Trino does not use log4j in the core engine or runtime classes. There are some connectors that include the log4j dependency from client dependencies, but are either not used or are not versions affected by the Log4Shell vulnerability. Regular security reviews, including code and dependency analysis, are part of the regular development process. As we learn more we will update the code to keep vulnerabilities out of the code. 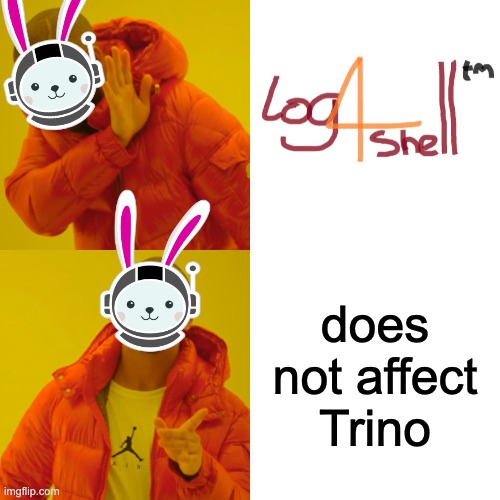 Trino connectors with the Log4j dependency

If you do a search in the Trino repository, you’ll notice two direct dependencies of the log4j dependency shows up in two of the connectors, Accumulo and Elasticsearch.

The Accumulo connector depends on log4j 1.2.17, which although isn’t vulnerable to Log4Shell, has other vulnerabilities. These vulnerabilities do not apply to how we’ve used the loggers in the connector code. To be clear, despite the small use of this logger in the Accumulo connector, there is still no threat even if you are using it. We are working on removing the uses of this log4j library to avoid any confusion in an upcoming release.

We take security seriously on the Trino project, as it provides a single point of access to your data sources. We’re taking precautionary measures to protect against the vulnerability from creeping its way into future versions. In version 366, we’re removing that dependency and adding a dedicated rule to the build process to ban log4j as a direct dependency.

What should you do?

We know there can be a lot of concern when vulnerabilities come up. We wish you all the best of luck while you work hard to mitigate the risk of exploits in your systems. If you have any questions, reach out on the Trino Slack.