It might surprise some that our departure from Facebook was one of the simplest decisions we’ve ever made. Many posts that discuss leaving a FAANG company focus on leaving some grand sum of money or prestige of working at the company. For us, we were leaving the company where we had launched a project that we knew would quickly outgrow the walls of Facebook, and solve a much larger set of problems in the analytics domain. At the time we didn’t quite anticipate that Presto, a distributed SQL query engine for big data analytics, would be adopted around the globe by thousands of companies and an overwhelming number of industries. We appreciate Facebook for serving as the launchpad that inspired others to adopt Presto. Despite the harmonious beginnings, once the needs of the community and Facebook no longer aligned, we had to leave, but we’ll get to that part shortly. 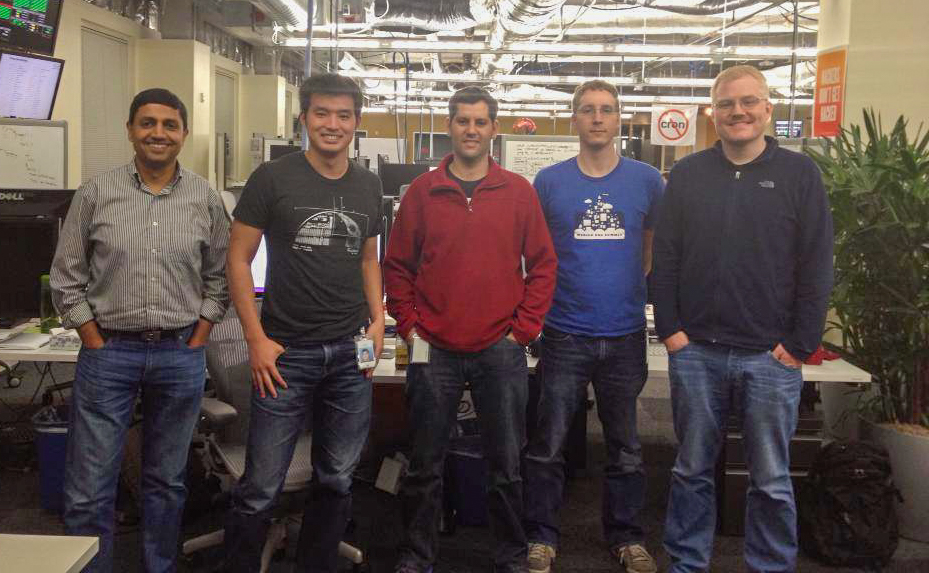 People make up communities, not companies

When we created Presto, it was clear to us that it needed to be open source. Presto started in 2012, just before the Facebook IPO. The culture was very conducive to starting an open source project. At that time, Facebook was working on Open Compute which ended up disrupting the hardware industry, and we wanted to achieve a similar impact for the analytics industry with Presto. We lobbied for and gained approval from the VP of Infrastructure, Jay Parikh, and released Presto as an open source project. It’s something that we wanted to do from the beginning, because we had worked with open source projects and believed that the most successful projects are open source.

Getting other people and companies involved makes for a healthier project. You end up not just building something that satisfies your needs, but needs from everyone else, and in turn, you benefit. We reached out personally to people from companies like Airbnb, Dropbox, Netflix, and LinkedIn to get them involved because we wanted to bootstrap a real community. Five people at Facebook hacking away was not enough. We actually had these companies beta test Presto, so that when we launched, the problems that they had found were fixed.

Moreover, the interest of a company is very susceptible to change from company growth, IPOs, acquisitions, directional pivots, and general political and cultural changes. As people start to put their time and energy into a project, their own identity starts to blend with the success of the project. This is much less the case with corporations. Since corporations include many people, it only takes a small set of people in the right position to decide that a project is no longer aligned with the direction or goals of a company.

Those of us in the Trino Software Foundation believe that individuals that work on Trino actually make up the community and not the companies who so graciously allow their employees to contribute. We view our community as visionaries that want to solve problems and build systems that last for decades into the future. We don’t allow near-sighted decisions that may affect the quality of the system, or that may diminish the value of the application to the greater problem space. Most people do not want to work on something for years, and then have the company change direction and throw away all their work.

To be clear, we’re not saying it’s a bad thing when a company moves in another direction. That is the nature of business and having corporate involvement can also be a healthy component of open source. To us, however, the core of what makes a project long-lasting and beneficial for everyone using the product are the people who are there building the system and interested in the problem space. So what happened at Facebook that caused us to leave?

As Presto became central to the infrastructure of prominent projects in Facebook, it attracted the attention of engineers and managers at Facebook who wanted to work on this project. This is a strong sign of success, but some of these folks did not have the same commitment to the open-source community. This was the source of much of the conflict as engaging in open-source takes a lot of time and effort, and we had a strict policy of “no one is special”. This means that everyone’s code is reviewed, and just because you work for Facebook you still have to earn commit rights. Engineers at Facebook are strongly motivated to create “memorable” works to advance in the company, and this means this extra work is just slowing things down. Feedback from these engineers ultimately culminated in the managers making the decision to give automatic contributor rights to any Facebook engineer working on Presto, so that these engineers could move faster.

You may think Facebook engineers or managers are the big bad wolf in this scenario, but they really are not. Engineers at these highly competitive companies must create memorable work, or they will not get the promotions they deserve. And if you are a junior engineer and do not get promoted, you get fired. Corporate leaders also have the right to change how they allocate resources to work on open-source projects. There’s nothing inherently wrong with any of this. The problem was changing the commitment we made to keep the open-source community neutral. It was at that point we knew that we had to create a fork of the project if we wanted to keep the community’s interest at the forefront for the project to remain healthy.

It was also at this point we made our single biggest mistake. We didn’t change the name away from Presto. It was admittedly hard to walk away from a name we all knew and loved. We believed that we had set up the project, so that the name “Presto” was owned by the community and not Facebook. The truth is that once the community walked out of the project, Facebook was the only one left in Presto and they became the sole owner. But, the biggest reason this was absolutely the wrong choice is much simpler; it made the people that stayed at Facebook really angry. We expected Facebook to do what they really wanted: stop doing the extra open-source work, fork internally, and leave the community alone. Instead, they somehow found the motivation to do a lot of work to set up a competing project. Finally, we spent two additional years continuing to build the Presto name rather than building the new name and brand. In hindsight, all of this was just dumb, and we were suffering from our own sunk cost fallacy. So we continued under the Presto name with the distinguishing suffix of PrestoSQL versus the original project’s PrestoDB.

The new PrestoSQL project gave a new home to the existing Presto community. It provided a project that focused on the open source community and not just the needs of Facebook. It also gave us time to troubleshoot problems of people who used Presto. This is what we were doing internally at Facebook but instead we applied our knowledge of the system towards the community. This was one of the reasons why leaving Facebook was so beneficial. As we worked closer with everyone else, we started learning what areas of the project we should focus on and it turns out that many of the things we were working on at Facebook were simply not problems that all the other people in the community were facing. This wasn’t the only benefit to us leaving Facebook, though.

The hardest part about making a new project successful is user adoption. Building great software doesn’t organically build a community. Presto gained some of its initial popularity because Facebook used it. We never had to try very hard to develop the community initially as the Facebook brand did a great job at getting people’s attention. But this community was exclusive to Silicon Valley companies. Leaving Facebook acted as a forcing function for us to build the community in a classic grassroots way. We went out and started talking to people, getting people connected, doing more promotions and events. We were pretty motivated after we left. However, all of this is a lot of work for a few programmers and while it’s great to see people respond to your work, it takes a lot out of you. This provided the conditions that gave rise for members to step up in the new project and become more involved.

We saw the pattern repeat when we were forced to rebrand and changed the name to Trino. We doubled down again on developing the community, and again participation accelerated. It’s because of this that we believe the Trino community is stronger than ever before. 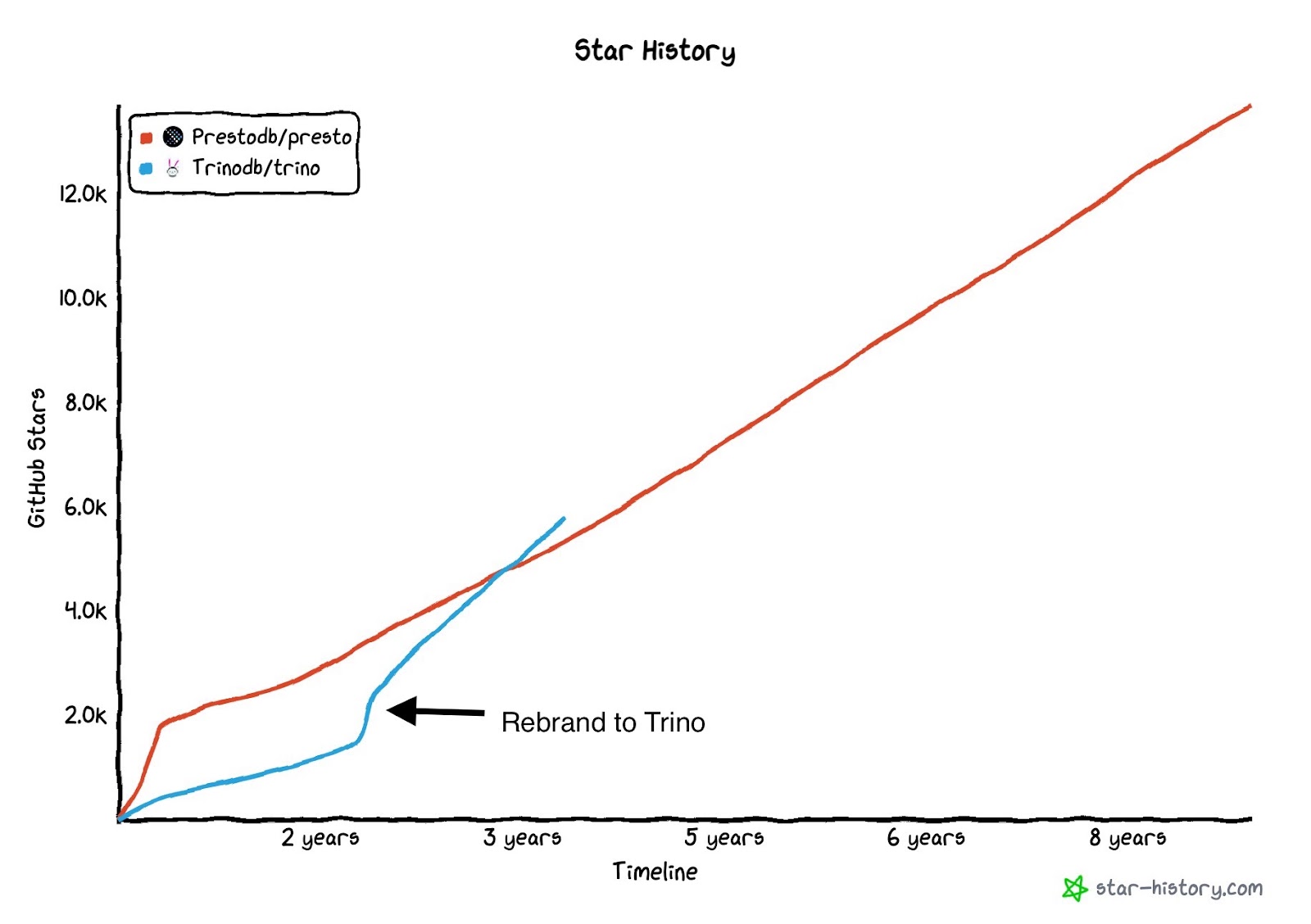 Since the split, Trino release cycles have increased and far surpassed the speed we had when we were running Presto. Once brand confusion was settled with the change to the Trino name, the community numbers skyrocketed and we saw unprecedented growth in metrics like GitHub stars, YouTube subscribers, and Slack members. We have many new community-driven features released in Trino that we will be discussing in more detail in another blog post coming soon. To name a few, Trino now supports fault-tolerant execution mode, revamped its timestamp support, dynamic partition pruning, polymorphic table functions, advanced window functions, and much much more! 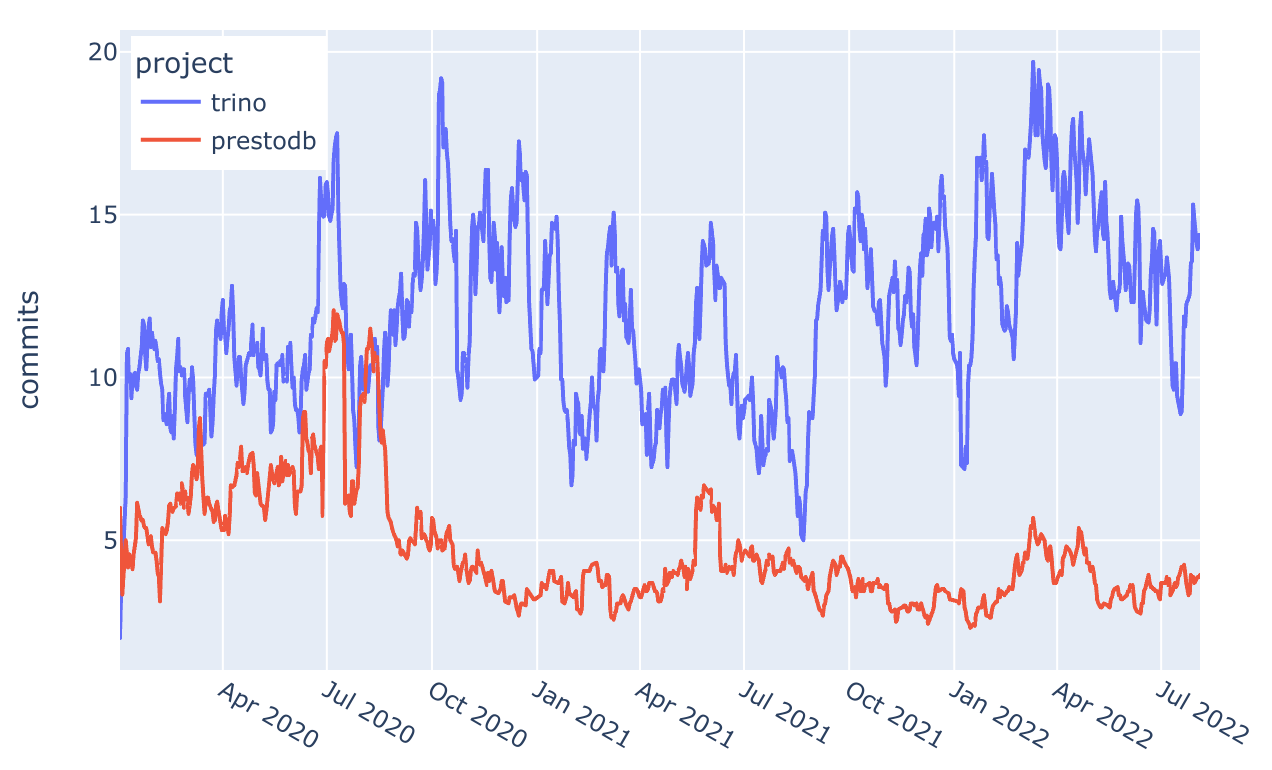 These metrics help confirm our experience in previous open source projects and with Trino. In the long run, individual-driven open source projects tend to lead to healthier communities and healthier ecosystems over company-driven open source projects. We believe that, we practice that, and we are now reaping the benefits of it as we close the pages of the first decade of this remarkable project. We can’t begin to express how thankful we are to all of you who believed in us and have helped grow Trino to what it is today. Also, we do thank the Facebook leadership, especially Jay Parikh, who gave us the green light to create and open source Presto from the beginning. We are looking forward to the twentieth and thirtieth anniversaries as we continue to disrupt the analytics industry and improve the lives of those who work in it.