As we reflect on Trino’s journey in 2021, one thing stands out. Compared to previous years we have seen even further accelerated, tremendous growth. Yes, this is what all these year-in-retrospect blog posts say, but this has some special significance to it. This week marked the one-year anniversary since the project dropped the Presto name and moved to the Trino name. Immediately after the announcement, the Trino GitHub repository started trending in number of stargazers. Up until this point, the PrestoSQL GitHub repository had only amassed 1,600 stargazers in the two years since it had split from the PrestoDB repository. However, within four months after the renaming, the number of stargazers had doubled. GitHub stars, issues, pull requests and commits started growing at a new trajectory. 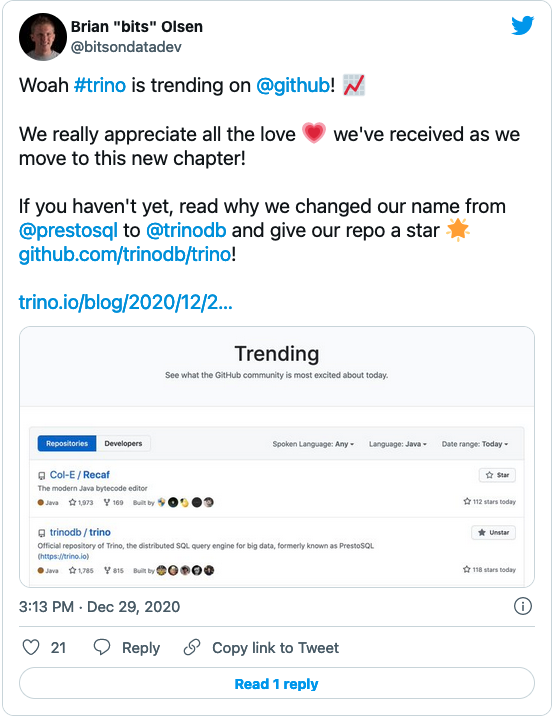 At the time of writing, we just hit 4,600 stargazers on GitHub. This means, we have grown by over 3,000 stargazers in the last year, a 187% increase. While we are on the subject, let’s talk about the health of the Trino community.

Let’s take a look at the Trino project growth by the numbers:

Along with the growth we’ve seen in GitHub, we have seen a 47% growth of the Trino Twitter followers this year. The Trino Slack community, where a large amount of troubleshooting and development discussions occur, saw a 75% growth, nearing 6,000 members. Finally, the Trino YouTube channel has seen an impressive 280% growth in subscribers.

A lot of the increase on this channel was due to the Trino Community Broadcast, that brought users and contributors from the community to cover 23 episodes about the following topics:

While stargazers, subscribers, episodes, and followers tell the story of the growing awareness of the Trino project with the new name, what about the actual rate of development on the project? 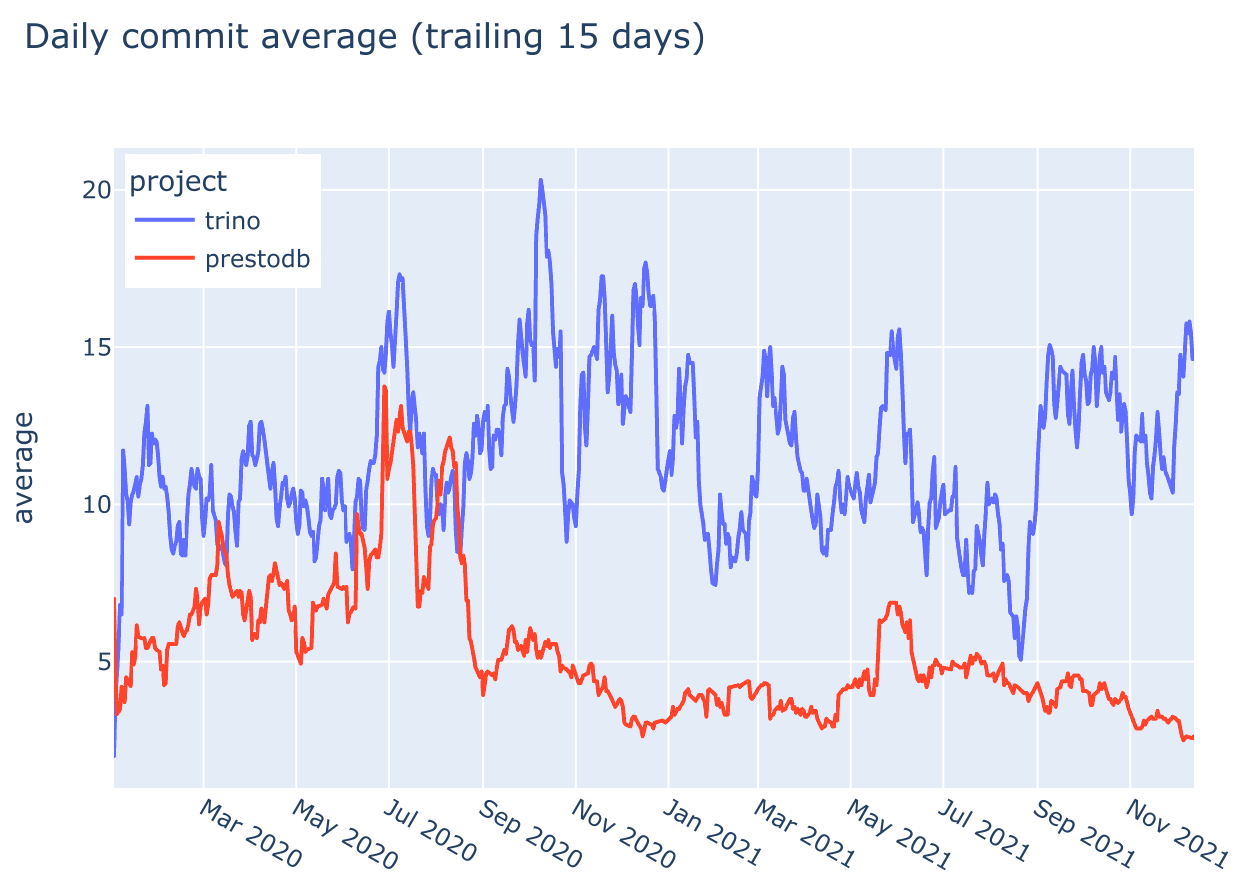 With the project’s trajectory displayed in numbers, let’s examine the top features that landed in Trino this year.

Here’s a high-level list of the most exciting features that made their way into Trino in 2021. For details and to keep up you can check out the release notes.

SQL language support is crucial for the increasing complexities of queries and usage of Trino. In 2021 we added numerous new language features and improvements:

Improved performance for the following operations:

Added the following improvements and features relevant for authentication, authorization and integration with other security systems:

A core use case of Trino uses the Hive and Iceberg connectors to connect to a data lake. These connectors differ from most as Trino is the sole query engine as opposed to the client calling another system. Here are some changes that for these connectors:

In addition to the above some more features were added that apply to connectors that use common code. These features improve performance using:

There are a lot of performance improvements to list from the release notes. Here are a few examples:

In 2021 we also enjoyed a successful inaugural Trino Summit, hosted by Starburst, with well over 500 attendees. There were wonderful talks given at this event from companies like Doordash, EA, LinkedIn, Netflix, Robinhood, Stream Native, and Tabular. If you missed this event, we have the recordings and slides available.

As a teaser, the event started with Commander Bun Bun playing guitar to AC/DC’s, “Back In Black”.

Renaming from PrestoSQL to Trino

As mentioned above, we renamed the project this year. What followed, was an outpouring of support and shock from the larger tech community. Community members immediately got to work. The project had to change the namespace practically overnight from the io.prestosql namespace to io.trino and a migration blog post was published. Due to the hasty nature of the Linux Foundation to enforce the Presto trademark, users had to adapt quickly. 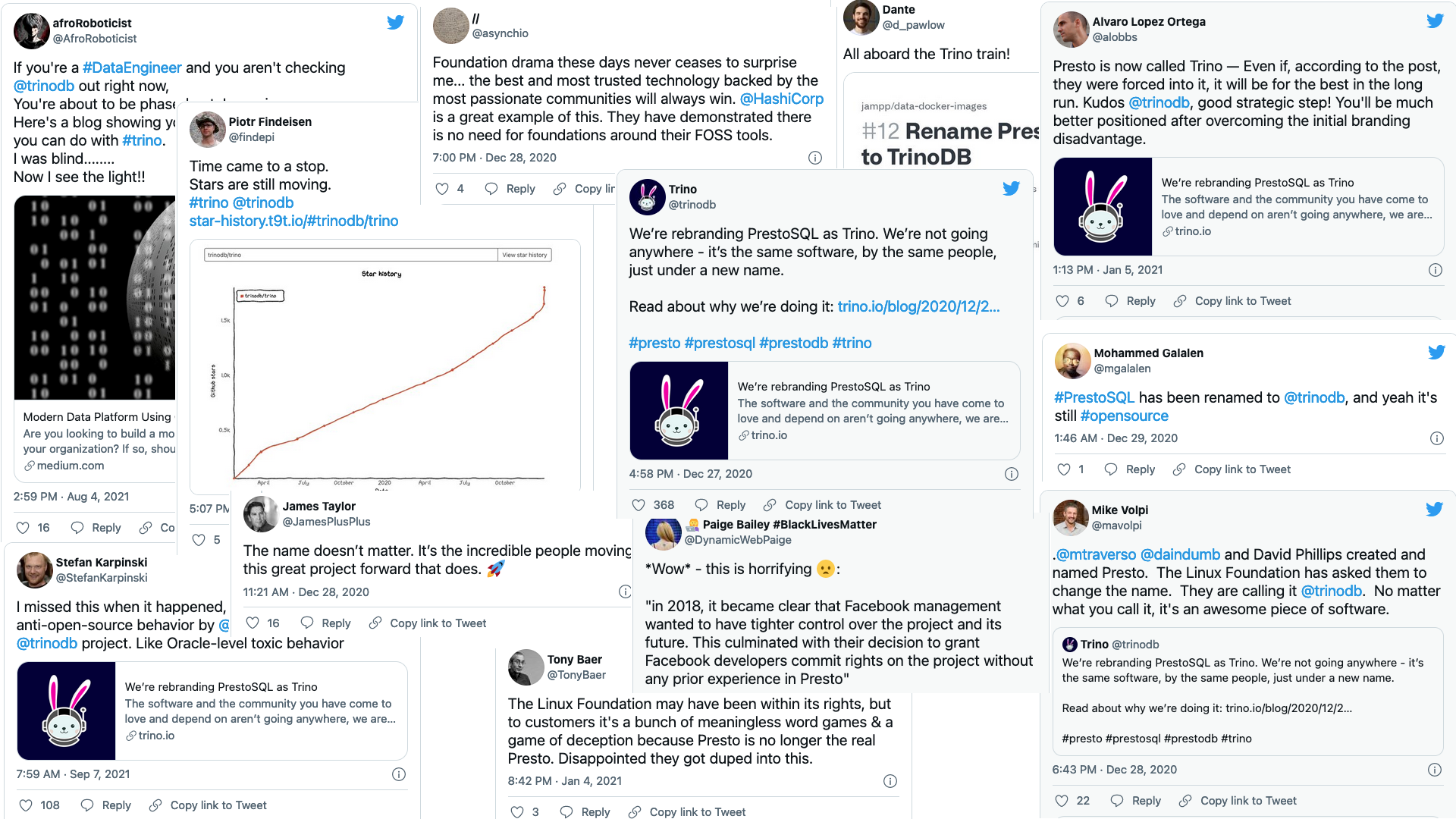 This confused many in the community, especially once the ownership of old PrestoSQL accounts were taken down by the Linux Foundation. The https://prestosql.io site had broken documentation links, JDBC urls had to change from jdbc:presto to jdbc:trino, header protocol names had to be changed from prefix X-Presto- to X-Trino-, and various other user impacting changes had to be made in the matter of weeks. Even the legacy Docker images were removed from the prestosql/presto Docker repository, causing disruptions for many users who immediately had to upgrade to the trinodb/trino Docker repository.

We reached out to multiple projects to update compatibility to Trino.

Despite the breaking changes, once the immediate hurdles fell behind, not only was the community excited and supportive about the brand change, but particularly they were all loving the new mascot. Our adorable bunny was soon after named Commander Bun Bun by the community. 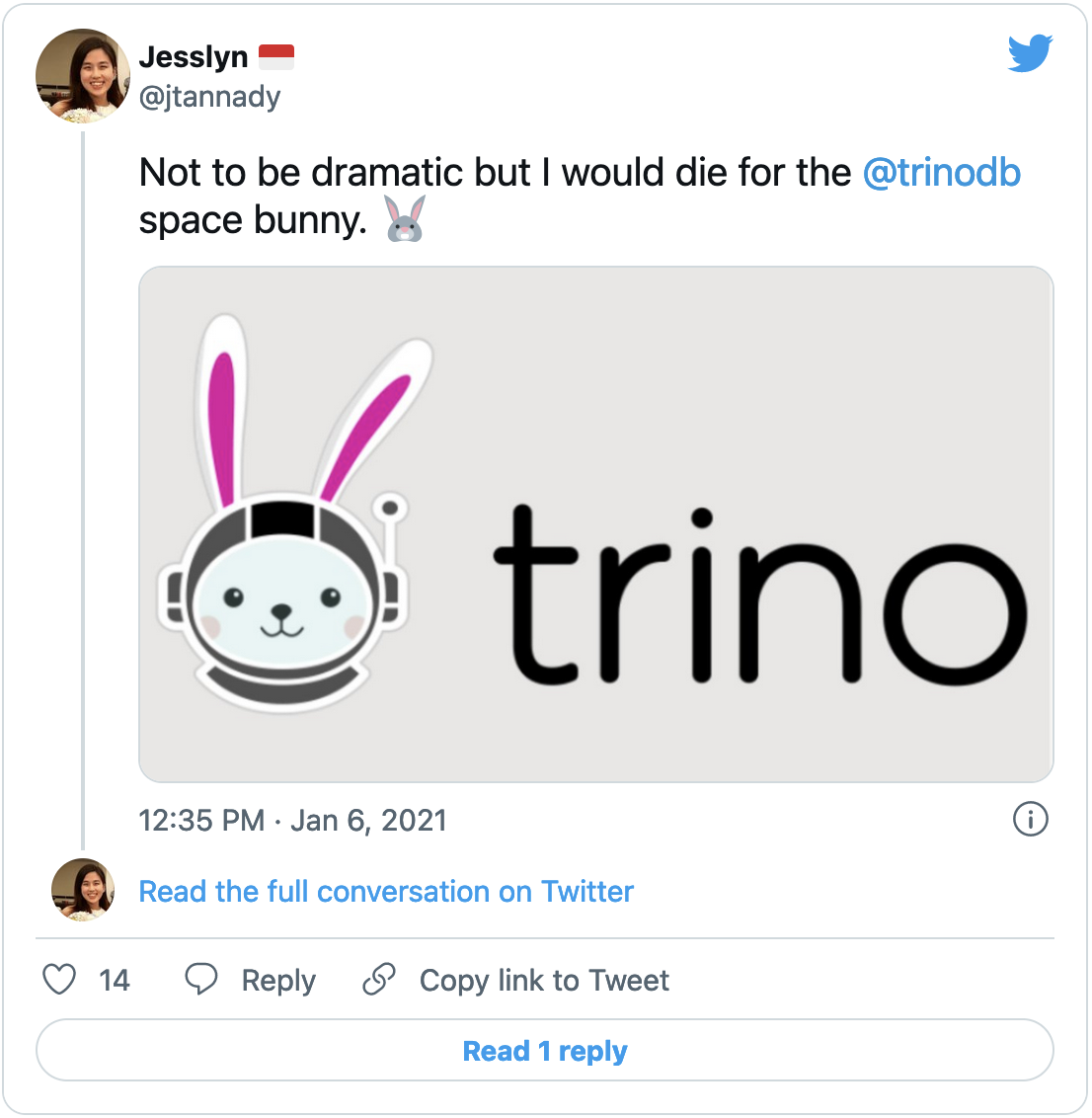 One of the interesting developments that came out of Trino Summit was a feature Trino co-creator, Martin, talked about in the State of Trino presentation. He proposed adding granular fault-tolerance and features to improve performance in the core engine. While Trino has been proven to run batch analytics workloads at scale, many have avoided long-running batch jobs in fear of a query failure. The fault-tolerance feature introduces a first step for the Trino project to gain first-class support for long-running batch queries at massive scale.

The granular fault-tolerance is being thoughtfully crafted to maintain the speed advantage that Trino has over other query engines, while increasing the resiliency of queries. In other words, rather than when a query runs out of resources or fails for any other reason, a subset of the query is retried. To support this intermediate stage data is persisted to replicated RAM or SSD. 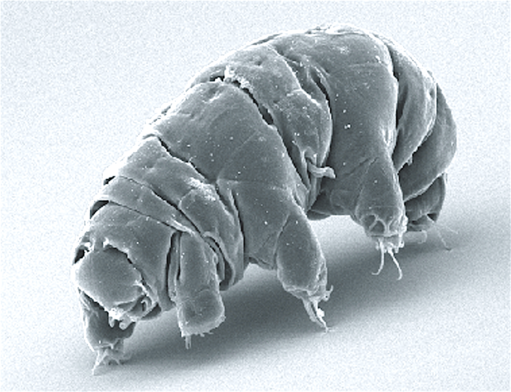 The project to introduce granular fault-tolerance into Trino is called Project Tardigrade. It is a focus for many contributors now, and we will introduce you to details in the coming months. The project is named after the microscopic Tardigrades that are the worlds most indestructible creatures, akin to the resiliency we are adding to Trino’s queries. We look forward to telling you more as features unfold.

Along with Project Tardigrade will be a series of changes focused around faster performance in the query engine using columnar evaluation, adaptive planning, and better scheduling for SIMD and GPU processors. We also will be working on dynamically resolved functions, MERGE support, Time Travel queries in data lake connectors, Java 17, improved caching mechanisms, and much much more!

In summary, living this first year under the banner of Trino was nothing short of a wild endeavor. Any engineer knows that naming things is hard, and renaming things is all the more difficult.

As we head into 2022, we can be certain of one thing. Trino will be reaching into newer areas of development and breaking norms just as it did as Presto in previous eras. The adoption of native fault-tolerance to a lightning fast query engine will bring Trino to a new level of adoption. Keep your eyes peeled for more about Project Tardigrade.

Along with Project Tardigrade, we are looking forward to another year filled with features, issues, and suggestions from our amazing and passionate community. Thank you all for an incredible year. We can’t wait to see what you all bring in 2022!