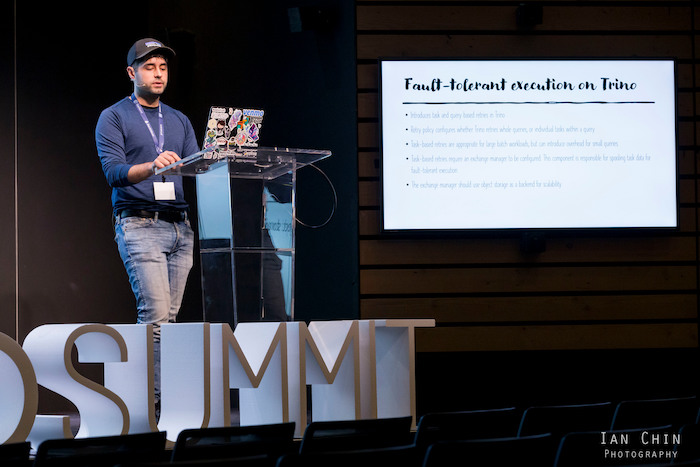 As we close in on the final talks from Trino Summit 2022, this next talk dives into how to set up Trino for batch processing. Trino has historically been well-known for facilitating fast adhoc analytics queries as opposed to long-running, resource intensive batch/ETL queries. This is due to the fact that Trino kills queries that run out of resources in order to prioritize faster query execution. Earlier this year, Trino added features to better support batch queries with a new fault-tolerant execution mode. This mode backs up intermediate data during execution time, allowing Trino to restart individual query tasks on failure rather than a query stage or the query itself.

Batch queries don’t typically involve human intervention and run asynchronously. These tasks may depend on each other and have a complex workflow. This talk describes how to orchestrate this complexity using Airflow’s new Trino integration to run Trino batch queries to solve (almost) all your data problems.

In this talk, we’re going to hear from Philippe, a Trino contributor and Solutions Architect at Astronomer, the company building a SaaS product around Apache Airflow. Philippe describes a fictional trading scenario that initially follows a traditional warehousing approach to storing data. This architecture has data sources that are queried and submitted as raw data into a centralized warehouse. Within the warehouse itself, the raw data is transformed into data ready to be consumed.

This model enforces centralization, in which one team runs the platform and builds the integration between producers and consumers. This team focuses on the aspects of the data platform which further separates them from the business use case. As source databases evolve, the central data team must keep up with these changes. As the data consumers that rely on the data infrastructure grow, this team commonly becomes a bottleneck.

Trino allows you to move the queries as close as possible to the federated data sources, removing the labor-intensive process of moving data into stages before ingesting it into a central warehouse. This doesn’t mean that data movement is no longer a necessity, but the necessity shifts from an availability concern to a performance and scalability concern.

Without investing into more resources, your data professionals are able to work closely with producers and stakeholders with a shared understanding of the domain. This increases data literacy and data availability throughout your organization.

Trino is not only for fast adhoc analytics with a human in the loop, but now provides a fault-tolerant execution mode that enables it to run resource intensive batch jobs. This, paired with the federation capabilities, make Trino able to ingest any data that can be represented in a tabular format. Users can implement user-defined functions and run transformations using SQL without involving intermediate systems.

To run Trino batch queries at scale requires building complex interdependencies between different tasks and often needs monitoring if there are any failures that occur. This configuration also demands reactive automation to handle the failing instances. Apache Airflow is an open-source platform for developing, scheduling, and monitoring batch-oriented workflows on systems like Trino, perfectly complementing the challenges of handling these intensive queries at scale.

Even before introducing fault-tolerant execution mode, Trino was already being used to run batch queries at scale. In these scenarios, Trino and a tool like Airflow already work well together because these jobs will take time and likely nobody wants to wait around to run the pipeline components in sequence. The reason why fault-tolerant execution mode brings the Trino and Airflow combination to the forefront, is due to the anticipation of Trino being adopted as a batch query engine tool as the learning curve to run ETL jobs on Trino becomes as trivial as other tools in the space.

Philippe dives into building out basic Airflow jobs to run over Trino and introduces the concept of a directed acyclic graph (DAG). He then dives into multiple useful features that help break down large jobs into manageable tasks, and jobs that can adjust the schedule based on runtime execution. Sharded job creation splits large batch jobs into smaller tasks that can easily be retried. Dynamic task mapping splits jobs into smaller tasks based on data observed at runtime. Finally, a new features called data aware scheduling can schedule tasks based on interdependencies between datasets.

To get started with Trino in Apache Airflow, check out the Airflow Trino provider documentation.

If you thought this talk was interesting, please consider sharing this on Twitter, Reddit, LinkedIn, HackerNews or anywhere on the web. Use the social card and link to https://trino.io/blog/2022/12/21/trino-summit-2022-astronomer-recap.html. If you think Trino is awesome, give us a 🌟 on GitHub ! 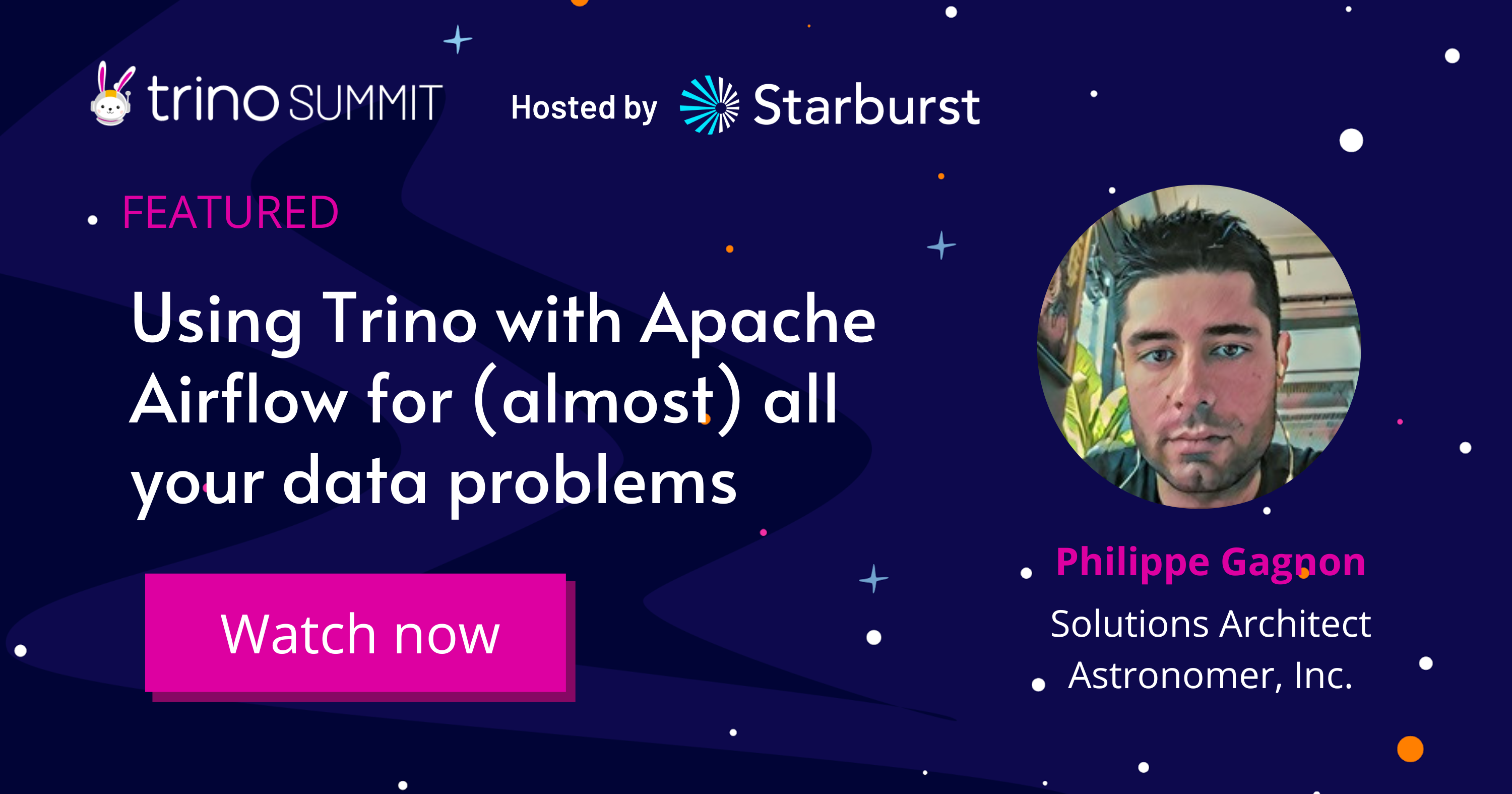