This December, AWS announced new instance types powered by Arm-based AWS Graviton2 Processor. M6g, C6g, and R6g are designed to deliver up to 40% improved price/performance compared with the current generation instance types. We can achieve cost-effectiveness by using these instance type series. Presto is just a Java application, so that we should be able to run the workload with this type of cost-effective instance type without any modification.

But is it true? Initially, we do not have a clear answer to how much effort we need to bring Presto into the world of the different processors. No care about the underlying platform is generally beneficial for development. But if using different processors enables us to accelerate the performance and stability of Presto, we must care about it. We must prove anything unclear by the experiment.

This article is the report to clarify what we need to do to run Presto on the Arm-based platform and see how much benefit we can potentially obtain with Graviton Processor.

As the Graviton 2 based instance types are preview state, we tried to run Presto on A1 instance that has the first generation of Graviton processor inside. It still would be a helpful anchor to understand the potential benefit of the Graviton 2 processor.

How to make Presto compatible with Arm

We are going to build the binary of Presto supporting Arm platform first. From the results, there are not so many things to do so. As long as JVM supports the Arm platform, it should work without any modification in the application code. But Presto has some restrictions on the platform where it runs to protect the functionality, including plugins. For example, the latest Presto supports only x86 and PowerPC architectures. This limitation prevents us from using Presto on the Arm platform.

To make Presto runnable on Arm machine, we need to modify PrestoSystemRequirements class to allow aarch64 architecture and more. For experimental purposes, we can apply such a patch to remove the restriction altogether.

This patch is all we have to do to run Presto on the Arm platform. It should work for most cases except for the usage with Hive connector because it has a native code not yet available for Arm platform.

Docker container is a desirable option to run Presto experimentally due to its availability and easiness of use. But there is one thing to do to build Docker image supporting cross-platform.

Docker buildx is an experimental feature for the full support of Moby BuildKit toolkit. It enables us to build a Docker image supporting multiple platforms, including Arm. The feature is so useful that we can quickly make the cross-platform Docker image with a one-line command. But the feature is not generally available in the typical installation of Docker. Enabling the experimental flag is necessary as follows in the case of macOS. 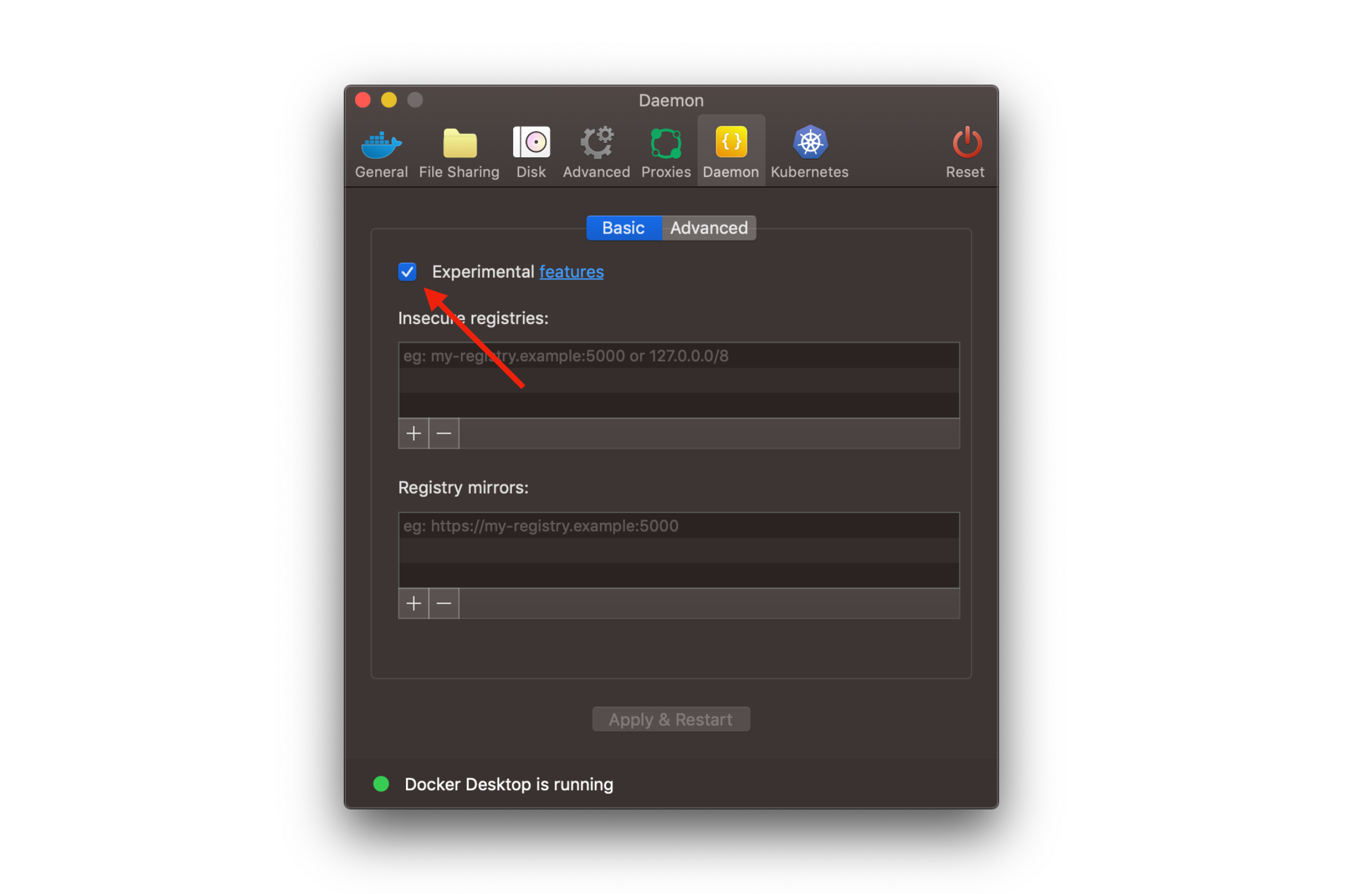 And make sure to restart the Docker daemon. We can build the Docker image for Presto supporting aarch64 architecture with buildx command. We have used the source code of 317-SNAPSHOT with the earlier patch in the PrestoSystemRequirements.

We should be able to specify multiple platform names for --platform option. But unfortunately, the Docker image of OpenJDK for Arm is distributed under the separated organization, arm64v8/openjdk. Building an image supporting Arm requires us another Dockerfile. Anyway, Docker images containing Presto supporting Arm are now available.

The following setup prepares the environment enough to run docker-compose on the A1 instance. As no docker-compose binary for Arm is distributed officially, we need to install and build docker-compose with pip. Make sure to run them after the instance initialization completes.

Here is our specification of the benchmark conditions.

Here is the result of our experiment. The vertical axis represents the running time in milliseconds.

It shows c5.4xlarge achieves the best performance consistently in every case. Compared with m5.2xlarge, the result was switched by the query type. a1.4xlarge and m5.2xlarge are probably competing with each other.

Although we use OpenJDK 8 for this case, it might not be able to generate the code fully optimized for Arm architecture. In general, the later versions, such as OpenJDK 9 or 11, give us better performance.

Let’s try to run Presto with OpenJDK 11 again. There is one thing to do. From JDK 9, the Attach API was disabled as default. We have found that we needed to allow the usage of attach API by adding the following option in jvm.config file, otherwise we will see an error message at the bootstrap phase.

Here is the performance comparison with OpenJDK 11. 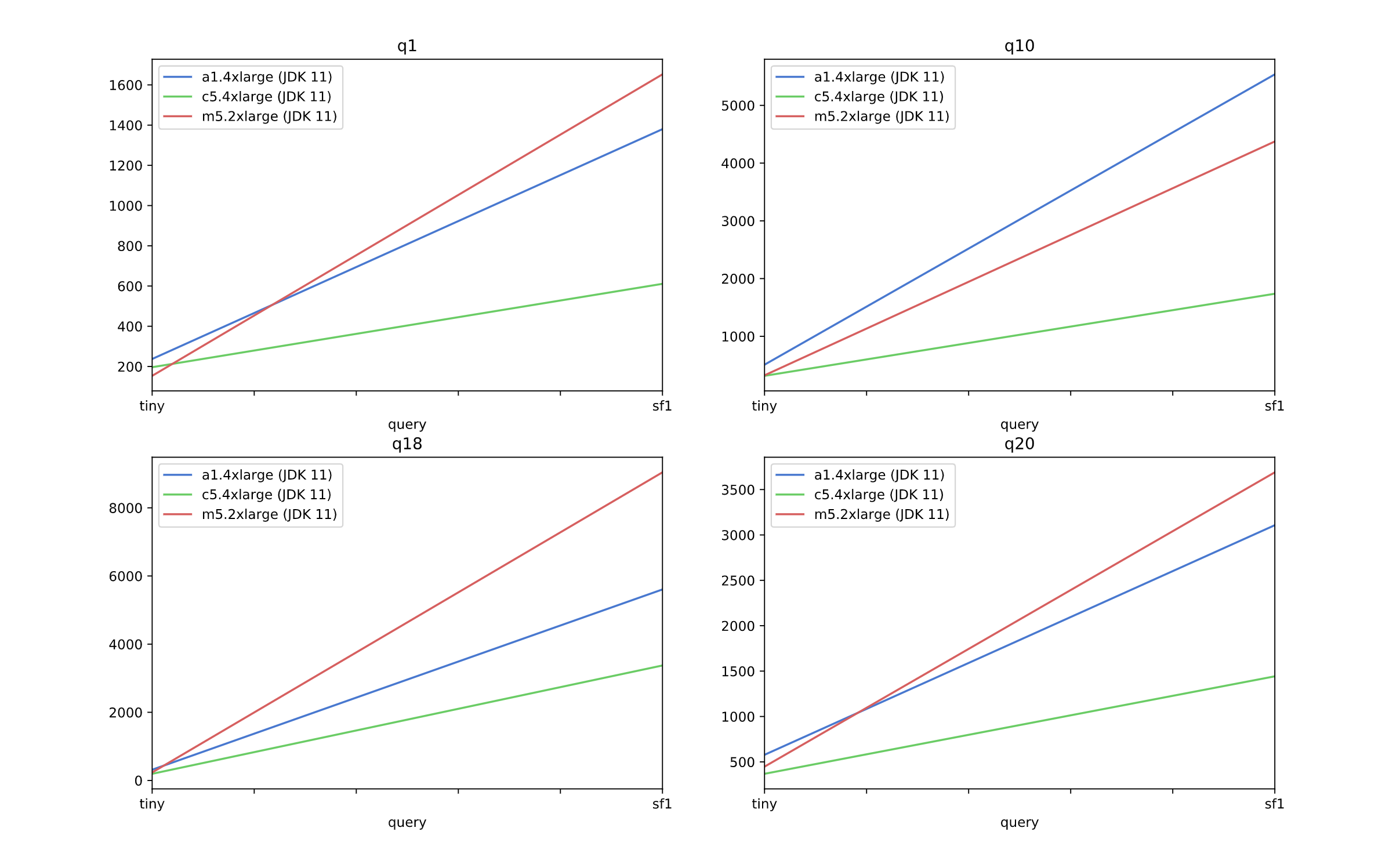 Considering the cost of a1.4xlarge instance is 40% cheaper than c5.4xlarge, it may make sense to use a1.4xlarge for the specific case. The on-demand cost of a1.4xlarge is $9.8/day and c5.4xlarge is $16.3/day for on-demand instance type. The public announcement says Graviton 2 delivers 7x performance compared to the Graviton processor. We may expect an even better performance by using a new generation processor. We cannot wait for the general availability of Graviton 2.

As Presto is just a Java application, there are not so many things to do to support the Arm platform. Only applying one patch and one JVM option brings us Presto binary supporting the latest platform. It is always exciting to see a new technology used for complicated distributed systems such as Presto. The combination of cutting-edge technologies surely takes us a journey to the new horizon of technological innovation.

Last but not least, we have used docker-compose and TPCH connectors to execute queries for the Presto cluster quickly in the Arm platform. Note that the performance of a distributed system such as Presto depends on various kinds of factors. Please be sure to run your benchmark carefully when you try to use a new instance type in your production environment.

We have uploaded the Docker image used for this experiment publicly. Feel free to use them if you are interested in running Presto on the Arm platform.

And also, I have raised an issue to start the discussion of supporting Arm architecture in the community. It would be great if we could get any feedback from those who are interested in it.