We’re happy to announce the release of Presto 347! This version includes:

Concept of the week: Query planning

Use EXPLAIN to learn what is planned. Also refer to chapter 4 in Trino: The Definitive Guide pg. 50.

In this week’s pull request https://github.com/trinodb/trino/pull/730, came from one of the co-creators Martin Traverso. This pull request removes duplicate predicates in logical binary expressions (AND, OR) and canonicalizes commutative arithmetic expressions and comparisons to handle a larger number of variants. Canonicalize is a big word but all it is saying is that if there are multiple representations of the same logic or data, then simplify it to a simpler or agreed upon normal form.

This is an example of a logical plan because we are talking about the query syntax by optimizing the SQL. It differs from the distributed plan as we are not determining how the plan will be distributed, where this plan will run and it does not run further optimizations that are handled by the cost based optimizer such as pushdown predicates. We’ll talk about this step more in the next episode. For now let’s cover a few examples

The format of the EXPLAIN used is graphviz. The online tool used during the show is Viz.js. You can paste the output of your EXPLAIN queries to visualize the query in a tree form.

Question of the week: How should I allocate memory properties?

In this week’s question, we answer:

How should I allocate memory properties? CPU : 16Core MEM:64GB

Before answering this, we should make sure a few things about memory are clear.

Space needed that the user is capable of reasoning about:

NOTE: There are no settings for this memory as it is implicitly set by the user and total memory settings. Use this to calculate system memory:

Total Memory = System + User, but there are only properties for total and user memory.

The final setting I would like to cover is the memory.heap-headroom-per-node. This config sets aside memory for the JVM heap for allocations that are not tracked by Presto. You can typically go with the default on this setting which is 30% of the JVM’s max heap size (-Xmx setting). 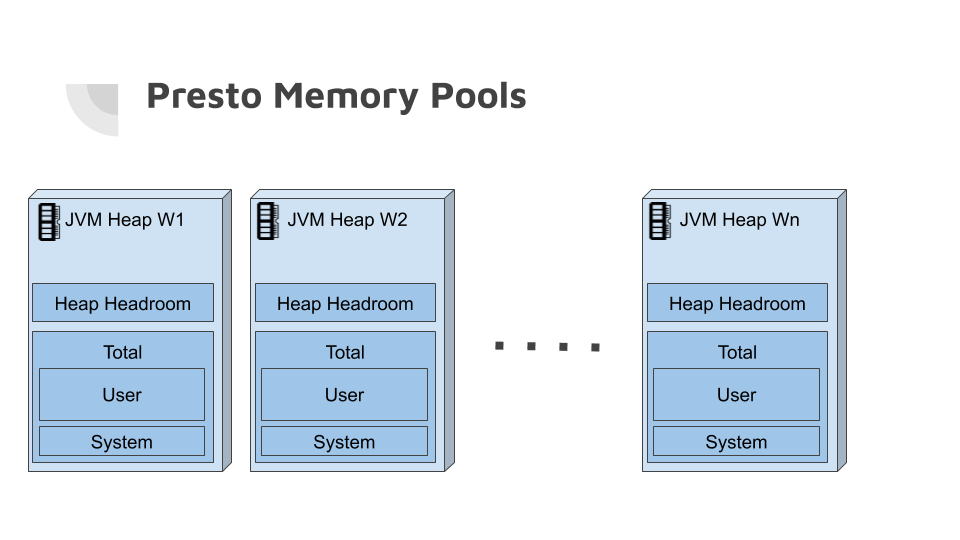 Dain really covers the proportions well in detail on the recent training videos. Here’s a snippet of what he recommends.

All in all, try to estimate the amount of memory needed by your max anticipated query load, and if possible try to get even more than your estimate. Once Presto is discovered by users, they will start to use it even more and demands on the system will grow.

If you want to learn more about Presto yourself, you should check out the O’Reilly Trino Definitive guide. You can download the free PDF or buy the book online.